The combined forces of the founders’ entrepreneurial drive and their ethical values shaped the company’s history. Dale Merrick took the first of many entrepreneurial leaps when he left 3M Corporation to start a manufacturing representative firm. Bob Wahlstedt and Lee Johnson both joined him to build a company that fostered both business success and a healthy life outside of work. 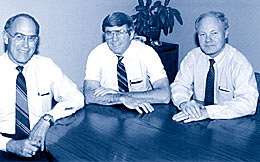 From the beginning, the three partners discussed how to shape and build the company through ethical values and principles. The founders accepted the importance of strong financial performance, but not at the expense of employees’ health and families. They envisioned a company in which all coworkers could perform valuable and creative work in an environment that supported their physical, emotional and spiritual health. They built Reell's success by placing a high priority on understanding and serving the needs of coworkers, customers, suppliers and the community. 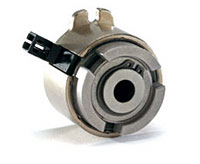 The partners identified opportunities in developing a new technology through its long-term relationships with its customers. Reell entered the wrap spring clutch market in response to 3M Corporation’s need for a clutch with a significantly longer life. Reell worked closely with 3M to create a clutch more reliable than any other on the market. Reell collaborated with 3M to continually improve the technology to increase quality and reliability. These generations of technical advancements led to a significant wrap spring clutch patent in 1975.

Reell's new clutch technology helped land Xerox Corporation as a major new client. Xerox, like 3M, became a valuable partner in both product development and the implementation of new business practices at Reell.

Early in their relationship, Xerox challenged Reell and its competitors to develop an electrically actuated wrap spring clutch. Reell's engineers listened to Xerox and other customers to develop and patent a highly reliable, cost-effective product that is still considered a world-class device.

In 1985, Hewlett Packard Company spurred another technological breakthrough for Reell. HP contacted Reell to design a constant torque hinge for a "laptop" computer it was developing. Although Reell did not produce any similar devices at the time, its engineering group responded to the request by designing an innovative plastic hinge with a spring inside that provided the needed function.

This initial development launched Reell as a premier supplier of constant torque hinges to the laptop computer industry.

In 1983, Reell faced a manufacturing problem that led to revolutionary changes in how Reell managed coworker relationships. Reell's set-up and quality control procedures simply took too much time. The set-up procedures included too many steps. The quality inspection process sometimes caused the time between set-up and the manufacturing run to last several days.

This small change marked the first step in a philosophical evolution at Reell from a directive style of management to a Teach/Equip/Trust style: The quality inspectors taught the set-up staff inspection procedures; Manufacturing equipped them with inspection instruments and trusted they would succeed. The company achieved greater productivity, higher quality products and the new management process improved coworkers’ job satisfaction.

The need for greater innovation leads Reell to start a new company. 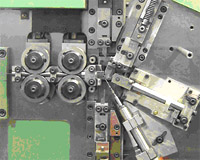 spring technology. Reell decided to explore developing an internal spring winding capability. The goal was to surpass their current supplier’s quality. This effort was successful and ultimately led to the formation of a separate corporation, Vadnais Technologies Corporation (VTC), in 1994.

VTC grew to over 100 people and established an outstanding reputation as a supplier of high-quality products for the medical and commercial markets. VTC was sold in 2004 to W. C. Heraeus GmbH of Hanau, Germany. W. C. Heraeus, a precious metals company that has been forward integrating into businesses that consume precious metals, provides VTC a better opportunity to reach its full business potential.

Reell began casual conversations about a European operation in the late eighties. By the early nineties almost half of Reell's sales came from Europe, and some customers pressed the company for local sourcing. In an effort to increase its capacity to serve customers globally, Reell established Reell Precision Manufacturing B.V., a wholly owned subsidiary, in the Netherlands in 1993. This group was formed to develop, manufacture and sell products for the European market. It was a long and challenging journey to profitability but Reell is now positioned for continued growth across all of Europe.

In early 1995, the company aggressively developed a new friction hinge technology for the laptop computer manufacturers, particularly in Asia. Reell introduced a new, patented technology that used small clips rather than springs or friction discs to generate torque. The new technology enabled Reell to supply 5mm and 7mm diameter hinges to the customers looking for very small devices.

Fast growth in the 90’s triggers facility expansion in 2001.

The rapid growth over the past few years triggered a major expansion in Reell's capacity. The company

enlarged its corporate headquarters in St. Paul, Minnesota up to almost 7,200 square meters (80,000 square feet) in the spring of 2001. The new space accommodates the addition of new coworkers and manufacturing capacity to meet the anticipated growth over the next several years.

Reell responds to the new millennium and Globalization.

As Reell moved into the 21st century, its customer base and new business opportunities moved increasingly away from the United States, to Europe and Asia. To remain viable and thrive, Reell needed to respond to the realities of global opportunities coupled with global competition, supply chain management and sourcing. This meant achieving world class organizational efficiency while remaining committed to Reell’s core competency as an innovative solutions provider. The first major initiative in this direction was achieving ISO 9001:2000 certification in 2003. Lean and Six Sigma became the focus in late 2004 and continue to bring unprecedented change and progress in labor efficiency, equipment utilization and quality. Reell Management expects that these initiatives, along with the establishment of regional offices in Shanghai, China and Taipei, Taiwan, will provide the basis for capitalizing on the opportunities of globalization while minimizing its risks. Reell believes it is well positioned for business success in a global economy.

Reell’s value’s and approach to business recognized with state and national Awards.

Reell’s business philosophy is well documented in the Beliefs, Values and Purpose section of this web site. Management succession in the late 1990’s, globalization and the 2001 recession are major events that challenged Reell to the practical application of its business philosophy in the new millennium. At the core of these beliefs is a strong commitment to all stakeholders and a search for win-win outcomes. Win-win outcomes became difficult to define in 2001, with over a 30% decline in revenues. Reell’s commitment to its coworkers made it unthinkable to institute layoffs as long as other alternatives existed. Profits were allowed to go to zero. Pay reductions were initiated for all except those below the target wage, with senior management taking the largest cuts. Dividends were reduced. These actions combined to allow the company to stay at or slightly above breakeven without layoffs. Business came back in 2002 and 2003 and Reell was well positioned to capitalize on this opportunity with its workforce intact. But even more important, the emotional and spiritual trauma of layoffs was avoided. Reell was recognized for this “unusual” response with the Minnesota Business Ethics Award in April of 2003, and the National Business Ethics Award in early 2004.

Reell has now moved into its third generation of senior leadership. Two of the Founders remain on the Board.  The Board now consists of a mix of inside Directors, including Reell's current CEO, and outside Directors who have never worked at Reell.

Through all changes two things remain constant: Reell continues provide innovative solutions using the combined efforts of coworkers, customers and suppliers, and Reell remains committed to the values, principles and culture that enhance the physical, emotional and spiritual lives of its coworkers, shareholders, community, and perhaps even its suppliers and customers.