Guitar players are the latest to benefit from a technology most often applied in small OEM clutch applications such as paper handling systems and power tools. The G7th Performance guitar capo, designed around a wrap spring clutch from Reell Precision Manufacturing, St. Paul, MN, has transformed a Medieval-looking guitar accessory into a sleek, high tech, 21st century apparatus. Guitarists worldwide are playing up the benefits. 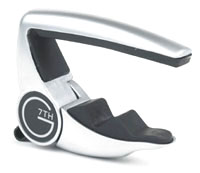 Until now, capos have tended to be downright clunky. Most are designed based on spring tension, elastic tension, or some variation of a screw clamp. Problems inherent in these designs include tension control and ease of use. Capos designed with a spring can exert too little string tension on the lower frets, and too much spring tension on the upper frets—throwing the guitar out of tune. Most capos are simply cumbersome and difficult to handle, which is a hindrance to performance.

Modulating into a new design

When Nick Campling, guitarist and head of 42 Technology Ltd., his own product development firm in the U.K., set out to design and market a new capo, he was familiar with these problems. His primary requirement was that the new capo be easy to position, remain firmly in place, and be easy to remove. It should be easy to operate by simply squeezing with the same force as playing a bar chord. And it should look good.

“What we were looking for was something that was infinitely adjustable,” said Campling. “That ruled out ratchets, because a ratchet just moves in steps. We wanted to avoid the steps so the tension could be set exactly.

“My partners and I tried several approaches, one being a wrap spring clutch,” said Campling, who formed G7th with business partners to market the new product. “I bought a couple of them to experiment with. The very first prototype was a wrap spring clutch strapped onto the side of a couple bits of aluminum. It was a horrible-looking thing, but it was infinitely adjustable, and we knew we were on the right track,” he said.

An Internet search for “wrap spring clutch” matched him up with his future manufacturing partner, Reell Precision Manufacturing, headquartered in St. Paul, MN and with European facilities in Elsloo, The Netherlands. “The wrap spring is the key to the design because it allows the player to squeeze the capo as if he were squeezing the guitar strings,” said Campling. “Plus, the capo gives the player free movement in one direction, while it locks in the other direction until released.”

The G7th capo clutch mechanism consists of three main elements: a fixed hub, a moving hub, and a spring whose diameter is slightly smaller than the outside diameter of the two hubs. 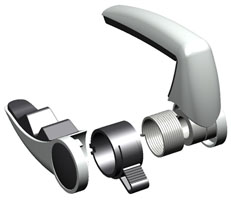 The spring is mounted on the two hubs in such a way that it slips in one direction but binds in the other. This allows the guitarist to easily squeeze the capo down on the strings to the desired tension, where it stays until released by a control lever that slightly unwinds the wrap spring and allows the moving hub to rotate and the capo to open.

Basing the design on a clutch mechanism, rather than spring tension or screw clamps, gave Campling the ease of use, tension consistency and compact size he required for the new capo. In fact, it is such a unique application of the wrap spring clutch that G7th has received a patent.

Campling contacted Reell engineers with the expectation that Reell would supply off-the-shelf wrap spring clutches for his design. But because Reell develops customized products, engineers on both sides of the Atlantic saw ways to make a good design even better. Their recommendations changed the scope of the project, ultimately saving time and money for both parties.

Reell discovered that a critical design element was creating a clutch mechanism with the right amount of “compliance” (or give) in comparison to the compliance of the rubber components that come in contact with the strings and neck. Wrap spring clutches require about one to two degrees of reverse motion to fully lock. This reverse motion had to be provided by the rubber parts as they were loaded and then pushed back against the clutch.

“Nick asked us for a clutch that he could assemble between the two arms of the capo,” said Mart Habets, co-managing director, Reell Netherlands. “We could see that this would complicate the design and increase the cost of production, so we offered two recommendations. First, we suggested that the clutch be incorporated into the assembly, and manufactured as part of it.” 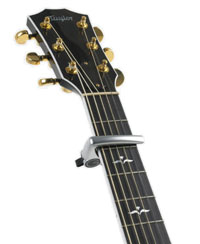 Manufacturing the capo as one unit reduces the problem of maintaining tight tolerances in the wrap spring clutch assembly. “If you supply a part that has to sit into another part, there are always some tolerance variations,” said Sean Vleugels, design engineer, Reell Netherlands. “That was the factor we could improve. We were able to meet the tight tolerance specifications required by the product by joining together all the parts, resulting in much better control.”

“Second, we even went so far as to recommend that we manufacture and package the product for consumer purchase, a completely new direction for us,” said Habets. “Normally, we ship parts to OEM companies for incorporating into other products. However, we recognized that we could reduce the parts required to assemble the capo. Even though we have lots of experience designing, building and manufacturing clutches, it was new to us to manufacture a good-looking consumer product with high requirements for cosmetic surface area. Fortunately, we had established a strong partnership with Nick, and worked together to meet the challenges of start-up.”

“One reason for the success of this project is the attention to quality Reell brings to the whole capo, not just the clutch,” said Campling. “They work extremely hard to make sure the quality is absolutely excellent, and I have really appreciated that.”

Introduced at the Frankfurt Music Fair in April 2004, the G7th capo is manufactured at Reell production facility in the Netherlands, where it is packaged with instructions and shipped directly to customers. Although guitarists may not recognize the wrap spring technology inherent in the design, they will recognize the elegance and simplicity that is the result of wrap spring technology.