After heart specialists surgically implant a pacemaker or defibrillator in a patient, they need to monitor and adjust the settings using a medical unit from Guidant Corporation called a Zoom® programmer. Similar in design to a large laptop computer, the programmer features a tilt-up screen that physicians can use to view the results. The angle of the screen is 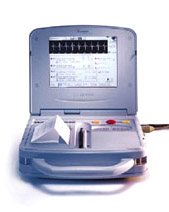 infinitely adjustable for proper viewing like most laptop computers. However, when Guidant recently incorporated a touch-screen design for more operator convenience, they found that the existing constant-torque hinges used to position the screen failed to keep the screen stable when physicians pressed it during data entry. The screen either bounced too much or was forced down, changing the viewing angle.

To help solve the problem, Guidant turned to Reell Precision Manufacturing in St. Paul, Minnesota, a leading manufacturer of standard and custom constant-torque hinges. Guidant asked Reell to help design a custom constant-torque hinge that would eliminate the backlash and unwanted movement of the Zoom programmer’s touch-screen, yet be infinitely adjustable for proper viewing.

“Previous hinge designs that used spring technology to provide constant torque allowed too much movement in this touch-screen application,” says John Kossett, a Reell design engineer. “Our newer patented friction clip technology eliminated the spring-back problem. In addition, what Guidant needed was a more robust hinge with more torque than was currently available in our standard product line.”

Reell’s patented constant-torque hinge technology features numerous precision C-shaped clips that grip the hinge pin and impart friction as the hinge is opened or closed. The amount of torque or holding force in a given size of a Reell hinge is determined during manufacturing by varying the number of clips that are placed on the shaft. Precise machining of the hinge pin, combined with hardened steel clips produces a constant-torque hinge with exceptionally smooth performance and long life. 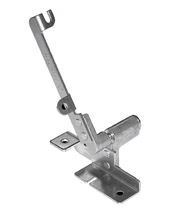 To develop the larger hinge for Guidant, Reell engineers started with an existing 7mm diameter laptop hinge that was the right basic design but had inadequate torque for this application. By scaling up the design to 9mm, they created a hinge that had the necessary torque and was structurally stronger. “We also worked together to redesign the sheet metal attachment between the hinge and the screen. By improving the structural integrity of this attachment point, we were able to eliminate virtually all the movement in the screen when it was pressed during data input,” says Kossett.

Making the touch-screen rigid is one thing, but making it also easily adjustable is another. According to Kossett, the ideal constant-torque hinge will have a static torque that is nearly equal to its dynamic torque. This allows the hinge to hold the screen securely in place, yet permits adjustment without having to overcome a large initial resistance. This salient feature of Reell constant-torque hinges is a function of the quality materials, part finish, clip design and the controlled manufacturing techniques employed, says Kossett.

Guidant met face-to-face several times with Reell engineers in developing a final product with more consistent torque and less backlash than hinges tried previously. "This collaborative method of doing business is innovative," says Eric Ware of Guidant Corporation. "To help lower unit costs, one of our objectives was to design a custom hinge that Reell could also market to other companies. So we shared development costs and the 9mm hinge has now become a standard offering for Reell.”

Of the final results, Ware says: “The new constant-torque hinge has enabled the redesign of our existing product with a new touch-screen feature -- which has been a major hit. What I like best is that the product has a simple, elegant design."