How can the diameter of a ½-inch spring matter in adjusting the recline of a car seat? Just ask Porter Engineered Systems, a manufacturer of mechanical seating and steering column adjustment systems for the automotive OEM and after-market industries. Remaining competitive in a crowded industry means that Porter Engineered Systems constantly strives to reduce costs while improving seat adjustment technology and position control devices. The company was able to achieve both objectives recently by teaming up with engineers from Reell Precision Manufacturing to improve the design of the company’s Mechlok® actuator that controls seat adjustment. 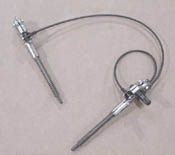 The Mechlok actuator can lock at any position within the set travel range and also lock in both directions. It is designed to withstand up to 2,000 pounds of force either forward or backward, a safety feature that helps prevent seat back movement in automobile accidents. Two of the Mechlok devices are used on each front seat back to adjust the angle of recline.

According to Jim Eaton, manager of manufacturing engineering for Porter Engineered Systems, a primary objective was to reduce manufacturing scrap in the production of the Mechlok® actuators, which are installed in over thirty different vehicle platforms with most major automotive manufacturers around the world.

“The springs we received from our previous supplier had too much variation in spring diameter for the application,” said Eaton. “The lack of precision created too much waste product. It also cost us in manufacturing productivity, and we risked performance problems in the field.”

The Mechlok actuator is a linear, mechanical clutching device that combines an actuator rod with a pair of counter-wound wrap-springs that grip the rod securely. When the seat adjustment lever is pressed, the wrap-springs are unwound slightly, allowing the rod (which also functions as the seat-back brace) to extend or retract depending on the seat angle desired. The four wrap-springs must grip and release with great precision or one side of the seat will either bind or release prematurely.

One reason the diameter of the wrap-spring is so important is that it affects the ultimate position of the spring’s “toe”—the little turned-up nub at either end. One toe anchors the spring to the clamshell housing and the other engages the actuator mechanism. If the toes of the wrap-springs are not precisely aligned, gripping and clutching are inconsistent from one device to the other. It was this inconsistency that cost Porter Engineered Systems dearly in scrapped parts. Since there was no way to test the springs before the entire Mechlok device was assembled, the whole mechanism had to be scrapped even though only the wrap-springs were bad.

Helping customers solve performance issues by creating a custom solution is a natural for Reell. Ninety percent of the company’s revenue is generated through the design and manufacture of custom precision torque solutions. The company also manufacturers a full line of standard products, including wrap spring clutches. “Reell engineers explained how their patented spring winding technology would give us springs with greater diameter consistency,” said Eaton.

In conventional spring-winding methods, the spring-winding machine is calibrated first and then the springs are formed. Spring tolerances are controlled by sorting the springs after they are made, resulting in excessive waste and high manufacturing costs. Reell’s patented design controls the diameter of a spring while it is being wound, virtually eliminating inconsistencies in spring diameter. A computer-controlled spring-forming tool uses a piezo-electric crystal to control the position of the forming tool while the coil is being formed. The spring-winding machine monitors and adjusts the diameter of the spring 400 times per second while it is being formed, which gives real time quality control, assuring accuracy while the coil is formed, not after it is completed. 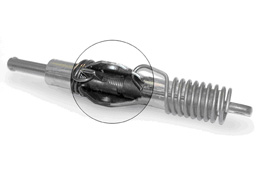 Reell engineers applied their custom design capabilities, including rapid prototype development, to evaluate the assemblies. “We took the lock assemblies apart, debugged them, and built our own springs to fit,” said Sean Frost, general manager of Reell’s Spring Technologies Group. “In addition to improving spring diameter, we also helped improve other performance characteristics, such as “chuck” or looseness in the seat adjustment. This helped increase the load-holding capability by about 20 percent.”

“Reell helped us understand all the attributes required to make a good clutch spring,” said Eaton. “We now look at spring taper, torque and other attributes. Our original prints did not define all of the parameters needed to make a good spring.”

And the bottom line speaks for itself. “Now that the springs are manufactured to a precise diameter, we have decreased our production scrap by approximately 30 percent,” said Eaton. Reell has produced over 80 million springs for Porter Engineered Systems with no significant quality issues. “We are currently evaluating future applications where the spring winding technology can increase performance and reduce costs,” said Eaton.